Enchanting is a powerful skill which is divided into the following sections within the skill page:

You can filter the list of craftable scrolls by applicable gear type by clicking on the various gear icons in the textbox at the top of the Scrollcrafting page.

Entries marked with an * has a special condition to them, read scroll tool tip to find out more

When a scroll is unlocked, the base chance of creation starts at 40%. With every level after the initial unlock, an additional 4% chance is gained. Mastery levels do not affect the percentage, which means haste scrolls will be capped at 60% success chance.

The Scroll of Chances enchantment does not increase the success chance of crafting scrolls. When the crafting of a scroll fails, all ingredients used to make it are lost.

There are some important things to keep in mind before enchanting equipment:

Enchanting allows you to use your enchantment scrolls to give your item new properties.

This process has a 100% success rate and cannot fail. Applying new scrolls with a different effect to an item with an existing enchantment overwrites the old one.

Different tiers of equipment have a different number of enchantment slots available; from bronze with only a single slot, to stygian with six. Exceedingly rare items, such as the moss maul, can hold up to eight enchantments. To see how many slots any given item has, check the Equipment page. 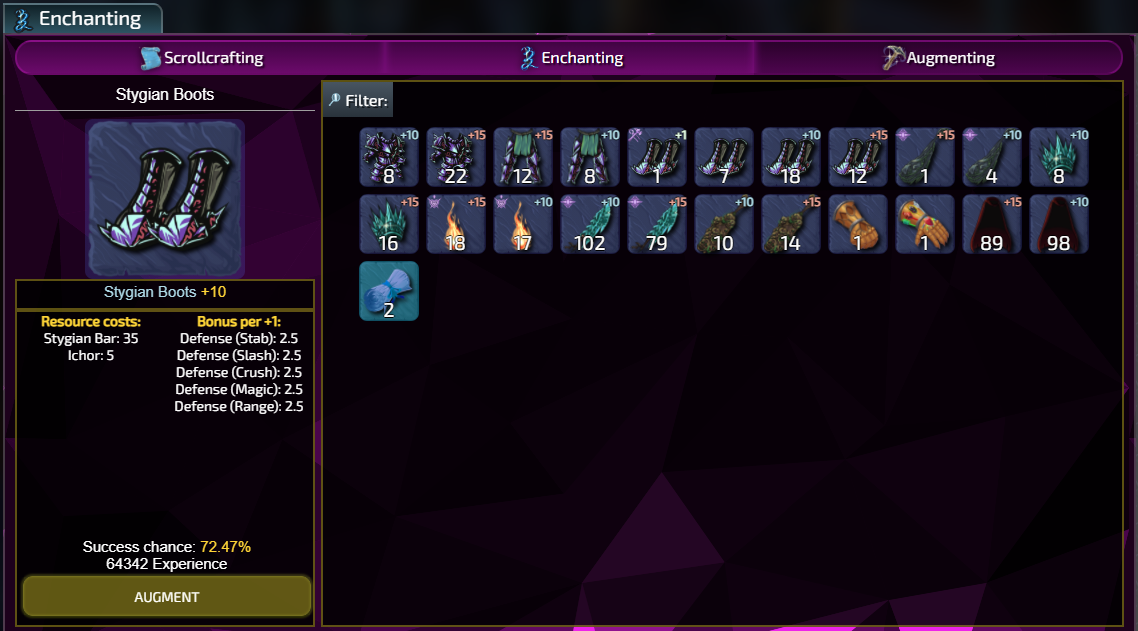 WARNING: If you fail while augmenting an item, it will be destroyed!

Augmenting allows players to increase the base stats of a piece of gear. This process has a chance to fail. If it succeeds, the base stats of the item will increase by a small amount. If not, it will be destroyed, as will the items needed to augment the gear.

Almost all items have no limit to the number of augmentations. However, the chance of failure will progressively increase with each level of augmentation. (See the augmentation calculator on Useful Stuff for more information). It is recommended to stop augmenting once the success rate gets too low for comfort.

Exceptions to the above include the Ocean's Embrace, which caps at +10 and Elite Scrolls, which cap at +20.

Exactly which stats are improved depends on the item. Augmenting bronze armor, for example, increases all defensive stats by 0.5 per augmentation level, while augmenting pickaxes increases their mining level bonus, and subsequently their mining speed. To see a full augmentation bonus list, check the equipment page.

Augmenting an item has a material cost. This is generally about 10% of the item's crafting cost, but it varies from item to item.

Augmenting chance can be increased via the Scroll of Chances enchantment. As well as through a global Shrine buff.

When augmenting an item, you can click on its name at the top of the box (under the Scrollcrafting tab) and type in a new name for it. The maximum length of the name is 13 characters, and it must also follow chat rules. The item must be successfully augmented in order to be renamed. If an item transforms and was renamed, it will keep its name.

The chance of an augmentation succeeding is calculated by the formula:

Where L is effective enchanting level, a is the target augmentation level, and c is level of the chances buff.

This table is accurate for all equipment in their respective tier/amount of scroll slots.

The experience gained from augmentation is calculated by the following formula:

Items with 0 enchantment slots will never show up in chat.

Augmentation messages show up in chat at the following augmented item levels, you can turn off these messages in settings:

Items marked with * does not use regular formula for chat messages