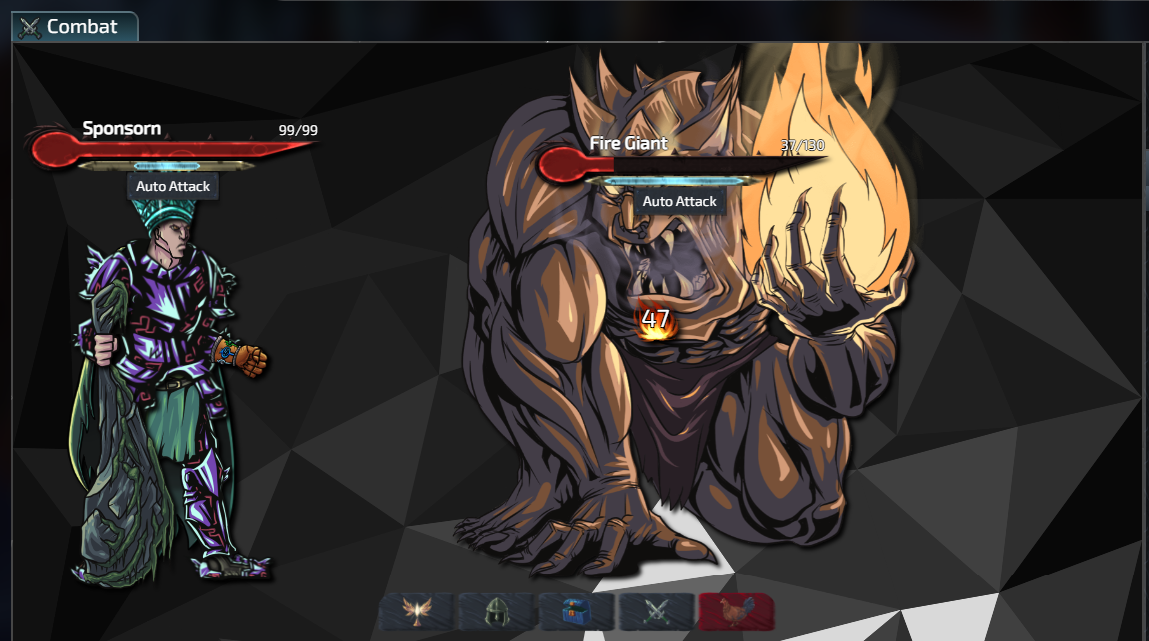 Combat is a game-play mechanic where players fight enemies located within increasingly more difficult zones. A beginner's guide on combat can be found on the wiki page combat guide or on the forum combat guide made by Magnus.

There are 4 skills to level in combat; constitution, attack, strength, and defense.

* Chaos Wastes is a combat zone balanced for group combat, allowing a maximum of two players in a party to fight alongside each other. Stats differ for one and two players.

Special combat areas include the Foraging zone Living Forest, and the Mining zone Deep Pit, where you may randomly encounter Spriggans or Greater Demons respectively. Players may not run from these encounters, and failing results in a 15-minute lockout timer before they can access that zone again.

Death occurs when a player's health reaches zero. The preceding action will be cancelled and the player returns to idling.

Health slowly regenerates on its own and can be modified with the Scroll of Healing. Dying will not result in the loss of exp/items/gold etc.

Mastery levels have no effect on combat.

There are various stats that can affect combat. These stats are determined by a player's equipment (armor and weapon), although each point in a player's level contributes more to stats than equipment.

Accuracy is determined from a combination of stats from equipment and attack level which is used to determine hit chance.

The formula for accuracy is

Keep in mind that the hit chance is also determined by an enemy's defense toward your attack type.

The only way to deal 0 damage is by missing the target, all accurate hits will deal at least 1 damage. The Demon Skin buff can decrease a damage to 0.

Max hit can be calculated with the following formula:

Max hit from a hard-hitting monster can only be decreased with the Scroll of Protection and/or the Demon Skin buff.

Defense from equipment and bonuses determine the dodge rate along with defense level. Keep in mind that dodge chance is also determined by enemy's attack and your defense to their attack type.

The formula for defense is

where you use the corresponding defense bonus for whatever type of attack you are defending from (ex. Stab).

There are three attack types (slash, stab, crush) which is determined by the weapon you use (bare hands are considered crush). Attack type determines the type of defense the enemy uses. This can be important since some enemies are weak to one type of attack, making it easier to hit if that type of attack is used. E.g. all giants are weak to crush, making battleaxes effective weapons to use.

Attack speed is a stat that determines the amount of time between attacks. The attack speed differs with every weapon. Bare fists have an attack speed of 2.4 seconds.

The Scroll of Patience increases damage based on how slow the weapon hits.

Elite Scrolls are found as a combat drop and offers a harder combat challenge for the player when the seal is broken. All combat zones drop a scroll, full info can be found here

Dungeons are multiplayer instances containing harder versions of the monsters and a boss. A key is required to enter the dungeon with craftable key pieces found in select zones.

Aberrant Shrimp are fought when augmenting a Shrimp Bauble until it breaks. They have 300 HP and drop Shrimp and one of either Shrimp Carapace, Shrimp Greaves, Shrimp Helm, or Shrimp Shell.

Spriggans are fought when Foraging in the Living Forest. They have 75 HP and drop Branches, Logs, Sageberry Bush Seeds, and Elder Tree Seeds.

Greater Demons are fought when mining in the Deep Pit. They have 89 HP and drop Scrolls, Demonic Trial, Ichor, and Gold Ore.